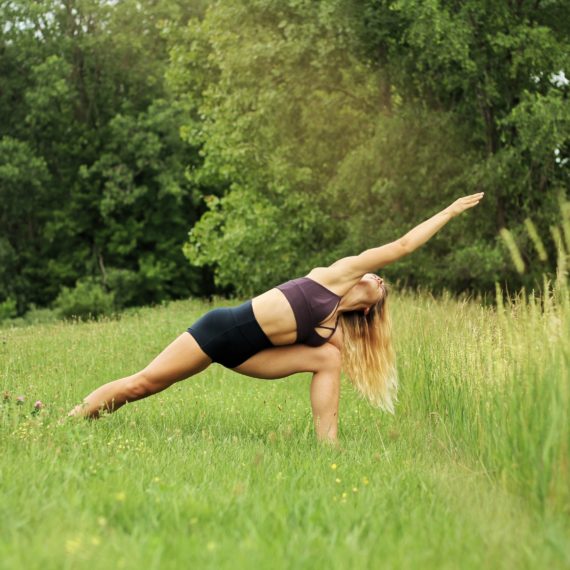 With promising evidence that both cannabis and cannabinoids play a role in decreasing anxiety and pain and that yoga does the same, it seems likely that the combination of the two may be beneficial.

Most people, at some point in their lives, suffer from physical pain, whether chronic or acute, and almost 20% of Americans live with anxiety. When pain or anxiety enters our lives, it can feel debilitating, especially when traditional treatments don’t work. After millennia of anecdotal reports, science is finally adding its own evidence for the use of cannabis in treating pain and anxiety disorders. When paired with complementary methods like yoga and meditation, each gaining its own scientific credibility, there may be more reliable relief for pain and anxiety sufferers on the horizon.

Cannabis and its associated compounds tetrahydrocannabinol (THC) and cannabidiol (CBD), as well as other compounds like terpenes, have recently been the subject of scientific studies for their potential healing properties. Studies have been conducted on CBD’s role in general social anxiety disorder, as well as synthetic cannabinoids for difficult-to-treat pain. To understand why such treatments may be found to be effective, it is first important to understand how such substances may work in the body.

Understanding must begin with the endocannabinoid system (ECS). To put it simply, the ECS has three main parts: there are the endocannabinoids the body makes, receptors for endocannabinoids located throughout the major organs of the body, and enzymes that break down any excess endocannabinoids. The ECS is thought to play a major role in maintaining mood and moderating pain—naturally occurring imbalances in the system have been linked to an increase in diseases, including multiple sclerosis and cancer. With the discovery of the ECS, researchers gained a great deal of insight into how the body communicates with itself.

There is some evidence that the ECS also plays a part in the stress response in humans; researchers have been exploring the use of molecules that are functionally similar to endocannabinoids: phytocannabinoids (cannabinoids made by plants, including THC and CBD) and synthetic cannabinoids (made in a lab).

CBD, now available nationally, continues to be enthusiastically studied for its potential role in relieving chronic stress. Authors from a 2013 study in mice writing in the International Journal of Neuropsychopharmacology, noted that the application of CBD in anxiety disorders and depression is a promising treatment avenue and warrants further study.

Yoga has also been shown to have an impact on the body’s stress response — it seems to interrupt the reception of constant stress hormones, thereby improving the functioning of the immune system. The authors of a 2008 study in the International Journal of Yoga concluded that “managing stress, especially chronic or long-term stress (even if it is not intense), by practicing various relaxation techniques, may help people overcome other co-morbidities associated with diseases and lead a better quality of life even during periods of stress.”

A 2012 study in the journal Evidence-Based Complementary and Alternative Medicine predicted that frequent yoga practice, including that done at home, would lead to better long-term health outcomes. The researchers noted that the incorporation of healthy habits into one’s daily life was the most important element, more so than the length of time one has been practicing yoga. They also noted that controlled studies need to be done in order to prove causation.

Practicing what is called the Eight Limbs of Yoga is one of the most holistic approaches to creating a more mindful, lower stress life. The eight limbs include Yamas (ethical guidelines for interpersonal interactions), asanas (the physical practice of movement), pranayamas (focused breath work), and Dharana (the practice of intense concentration). Using all the limbs together can help build a healthier, lower stress life.

With promising evidence that both cannabis and cannabinoids play a role in decreasing anxiety and pain and that yoga does the same, it seems likely that the combination of the two may be beneficial. However, there are a few things to keep in mind.

First of all, check the laws in your state regarding cannabis use, and ensure any location outside your home you may practice in does not prohibit cannabis use. Also, if you are a new user of cannabis, it may be best to start with just CBD or CBD-heavy strains. It’s also a good idea to plan on an introductory session with your strain (best at home) to know how your body will react to it before you start incorporating it into your yoga practice.

For some help understanding which strains pair best with which type of yoga, we asked a yogi and received the following advice: if stress levels and muscle tension are high, try pairing a 1:1 THC/CBD strain with Hatha or gentle yoga. If you’re feeling anxious, a high (10:1) ratio of CBD/THC and a yin yoga session may bring relief. It is believed that THC can reduce anxiety until it reaches a certain level in the body, and then it can actually increase it. It may, therefore, be better to start with a no- or low-dose THC strain to achieve the desired effect.

As for how to consume your cannabis — the choice is yours! Different people have different preferred methods, from vaping to edibles and even to the application of topical creams. If you desire a more rapid onset (right before you hit the mat), vaping, or smoking your favorite cannabis strain is the best choice. Edibles are generally felt in the body, making them a good candidate for a physical practice, but they have a longer onset time: be sure to give them plenty of time to reach their full effectiveness before you are in class. If you have pain in your joints and want a preventative, or if after your practice you’re feeling those asanas, a cream or topical oil may be the way to go.

Anecdotal stories, combined with emerging science, suggest that the combination of cannabis and yoga may help relieve stress and pain — just remember to incorporate those yogic principles and consume mindfully.