Marathon Training Can Include Cannabis 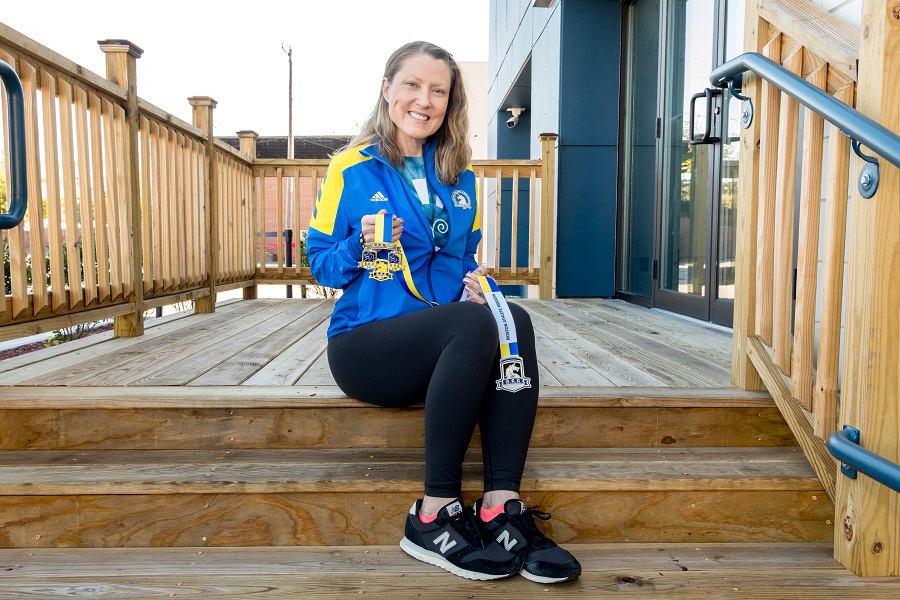 “Marathon runner” and “regular cannabis user” are titles that don’t have to be mutually exclusive, as evidenced by Heather Ryan: our Framingham location’s dispensary manager and runner extraordinaire.

As her 12th marathon to date, Heather will run the Boston Marathon for the first time on Monday, October 11. Ahead of the race, we caught up with her to learn how cannabis factors into her training and fitness regimen.

Q: How long have you been running marathons?

A: I’ve been running marathons since 2013. Prior to that, I ran 5ks races, 10k races, and half marathons. I still run shorter distance races, but I really like the 26.2-mile marathon, though, because it’s mentally and physically challenging but fun at the same time. It’s like a journey.

Q: How many marathons do you have under your belt? Have you run any more than once?

Q: How and when did you get into running?

A: I used to run casually, just for fun, but I entered my first 10k in 2013. It was through the Boston Athletic Association and I had a lot of fun and loved the camaraderie with other runners throughout the whole training process and race itself. That fall, I signed up to run my first marathon: the Baystate Marathon based in Lowell. That same marathon actually ended up being my last one pre-COVID too, in the fall of 2019. I’m really looking forward to getting back into running alongside other people.

Q: What does your marathon training regimen look like? And how far in advance do you begin?

A: I usually do about three to four months of training before a marathon. To train, I typically run six out of seven days and go on one long run per week, ranging from 10 to 20 miles. I always train outside because I love to be out in nature to see the surroundings. Sometimes, I’ll run the Boston Marathon course for practice, and it’s always nice to see other runners with the same goals out there too. It’s like a community where we’re all cheering each other on.

Q: How does cannabis play into your recovery after you run and while you’re training?

A: Running nearly every day is very physically taxing, so cannabis helps me recover quickly so I can keep training. I use cannabis-infused gummies, especially those with a blend of THC and CBD. I usually eat them in the evening after I’ve done my stretching. Gummies really help reduce any swelling and inflammation I get in my knees after running. I also use topicals and infused balms for the same reasons, especially on my iliotibial band and hips. It’s perfect to use on sore muscles after stretching and foam rolling.

I also use vapor products for quick, discrete, full-body relaxation in the evenings after I’ve completed my training. And especially after those long training days, I love to drink an infused seltzer as a celebratory drink post-run. It’s nice to unwind without the sugar and calories that come with an alcoholic beverage. And, without the hangover, it’s nice to feel good in the evening without the effects interfering with the next day’s workout.

Q: Have you encountered any stigma in the running or active community about cannabis use?

A: There’s definitely a stereotype of the typical cannabis user, and many runners do not smoke because they worry about their lungs. I’m trying to remove that stigma and show people that athletes and runners can still use cannabis. Marathon runners put so much into our nutrition and hydration, and I think cannabis is just part of the process of managing my recovery. It relieves pain and stress and allows me to keep training.

Q: How do you respond to people who might not see the therapeutic benefits of the plant?

A: I think about Sha’Carri Richardson, the Olympic runner who was disqualified from running because of her cannabis use. Cannabis has not necessarily been proven to be a performance-enhancing drug. I believe she was using it to deal with grief from her mother’s passing the week before the Olympic trials began. There needs to be more acceptance, awareness, and education on the positive benefits and usages, especially on an international stage like the Olympics.

Runners are always looking for the next best trend in recovery, nutrition, etc., but they don’t often think of cannabis. It’s a natural, holistic way of treating your body that people can open their minds to instead of using other over-the-counter medications and other chemicals. Cannabis really can be part of a healthy, active lifestyle.